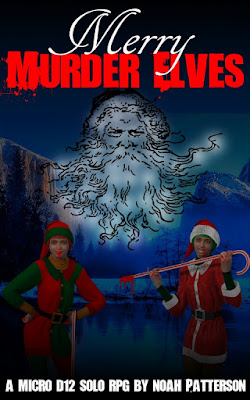 It’s Christmas Eve, but something is terribly wrong. The elves have gone mad with bloodlust, the reindeer are rabid, the gingerbread houses have been burnt to a crisp with the families inside, but Santa still must deliver presents by Christmas morning.


Can you help Santa and his Wife navigate through his house, workshop, and stables—and kill off the murderous elves and reindeer—in order to reach the sleigh and deliver the presents before Christmas morning?

Murder Elves is a Roll+Write Role-Playing Game of Christmas mayhem for a solo player. That means you don’t need a Game Master. This system uses a single D12 for all rolls and is based upon a simplified version of the Micro RPG system created by Noah Patterson for such games as The Dark West, Radio Mystery RPG, and Barbarians of the Gothic Waste. This new system is called the MicroD12 system and it is specifically designed for solo play.

This introductory edition of the game, featuring premade characters and premade maps, will show basic concepts and mechanics that will appear in the future rulebooks and adventures utilizing this system. Future books will include various game genres and settings that have become popular with gamers in recent and past years.

You can pick up this new RPG on DriveThru RPG today for only 99 cents!
Posted by N.C. Patterson at 9:11 AM No comments: Christmas is fast on it's way! The days are getting darker, the nights longer, and the cold is setting in. Many of us already have snow. So why not bundle up near the fire (or the radiator in my case) and play a fun, quick, and FREE print and play game? My newest roll-and-write game is availalbe now for download from DriveThru RPG.

Dead Outpost is a sequel to my previous game (released at Halloween) Dead Cabin. It is a roll-and-write style role-playing game that is easy and fast to play. It is suitable for up to four players but works best solo.

The Arctic Outpost of Dedalus 6 has been deathly quiet lately. Too quiet. When the research team of the outpost suddenly stumble upon a strange underground bunker under the ice, they know something is seriously wrong. Bodies that are long dead are inside—and they won’t stay down!

Barricading themselves into the outpost building the researchers realize their power has gone down and call for help. Unfortunately, there is a big blizzard on its way and the helicopter won’t be able to get through until morning.

Will the research team be able to barricade the doors, fight off the zombies, and survive the night? Or is this the end of the expedition for all of them?

You can download it for FREE now from DriveThru RPG. If you like it, please leave a small donation in the Pay What You Want box. 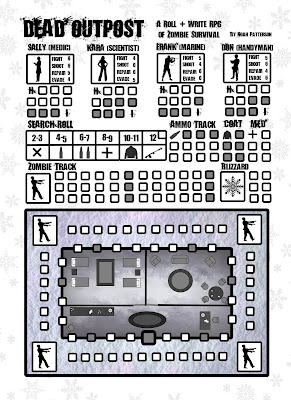 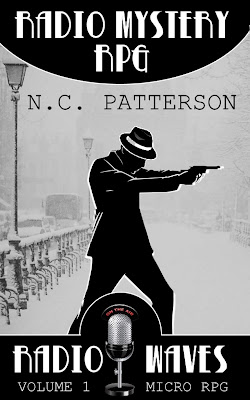 Merry Christmas, Gamers! Today, I am excited to announce the release of the first book in my new Micro RPG line. This book is part of a series of 1940s inspired pulp style games called Radio Waves. It is also the first book to use the revitalized and simplified version of my Micro RPG system.

The new game book is avilable now in digital PDF format on DriveThru RPG for only $1.99 or in paperback print format on Amazon for only $5.99. And, in honor of the Christmas season, this game includes a free holiday themed adventure (called an Episode) in the back of the book.

WHAT IS RADIO MYSTERY RPG?

Radio Mystery RPG is a pen and paper RPG that takes place in the crime-ridden pulpy noir world of radio shows and programs from the 30s and 40s. Ultimately, this game’s theme is centered on the drama and action present in detective and mystery radio shows rather than on gritty realism.

Each campaign (called a SHOW in this game) is split up into “timed” episodes. A cast of police officers, detective, PIs, dames, and femme fatales will come together to create compelling mystery stories in the grimy crime-ridden streets of 1940s America.

The Micro RPG V2 system is specifically designed to create a tense and pulp-esque form of storytelling where anything can happen. A sense of urgency is created by all the players using one deck of cards. When the deck runs out, the “Episode” of the radio show ends—potentially with a cliffhanger. Moreover, Radio Mystery RPG is the first in a series of gamebooks titled “Radio Waves.” Future books in the series will cover other classical radio show genres.

Many pen and paper role-playing games on today’s market are known to be very heavy with rules and regulations. Character creation alone can take up to an hour or more for some of these games. Many games even incorporate heavy board game elements such as tactical maps, tokens, and movement. Because of this fact, many would-be gamers shy away from RPGs because of the daunting complexity or rules. Gamers who enjoy RPGs may not have time for complex games.

Well, Radio Mystery RPG—along with other games in the Micro RPG line—focus more on the creative element of storytelling rather than number crunching or lengthy rulebooks.
Moreover, this book is part of the second edition of the Micro RPG (called Version 2 or V2). It takes the simple rules from the previous edition and simplifies them even further, making it so anyone can jump right in and enjoy the game.

In Radio Mystery RPG character creation should take no longer than 5 to 10 minutes for all players. Learning the game system and explaining it to players should be simple and straightforward as well.
The rules in this game act more like guidelines to facilitate good gameplay and storytelling rather than number crunching.

Radio Mystery RPG and other Micro RPGs should facilitate a fast-paced game that is easy to pick up for gamers who are on the go. You could play a half hour session during your lunch break at work, squeeze in a round during the baby’s nap, or even play while you are in the car during a road trip! That is the ease and leisure of The Micro RPG V2 system.
Posted by N.C. Patterson at 7:59 AM No comments: 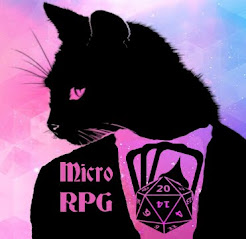